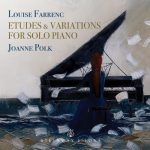 On February 7, 2020, Steinway & Sons releases Louise Farrenc: Etudes & Variations for Solo Piano (STNS 30133) from pianist Joanne Polk. This album highlights the works of prolific female composer Louise Farrenc, one of a handful of 19th century women who enjoyed success during their time. Farrenc rose to prominence in the male dominated world of 19th century music by virtue of her talent and her family’s encouragement and support. Farrenc’s gift for music was discovered early and fostered throughout her life by lessons in theory and teachers at the Paris Conservatory. Eventually she began publishing music with the help of her husband, Jacques Artistide Farrenc, who owned a music publishing business in Paris.

Farrenc’s compositions were well received, and in 1842, Farrenc became the first female professor of piano at the Paris Conservatory. Throughout her distinguished career she composed a large amount of music in many genres, from chamber works to symphonies, all of which were published and performed regularly in Paris and beyond.

Among the most influential of her works is a collection of 30 etudes written in major and minor keys in 1839. This collection was favorably received in the Parisian music press in 1840 and would go on to be adopted by the Paris Conservatory as required piano repertoire in 1845. As was typical of etudes at that time, Farrenc’s compositions were designed to target technical studies and build the expressiveness of the player. Featured on this record are 15 selections from Farrenc’s works in this genre.

Sets of piano variations made up a large part of the compositional output and concert programs of most major pianist-composers of the Romantic era, some of which feature variations or paraphrases of melodies drawn from popular operas of the day. Two sets on this album highlight Bellini’s Norma and Meyerbeer’s Les Huguenots respectively. Another set of variations on this recordng that requires great pianistic virtuosity is Air Russe Varié, which begins with a “Preludio” and proceeds to a minor-mode folk melody and variations.