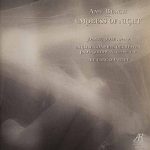 This CD is Volume 4 in the series of complete piano music of Amy Beach, and features her monumental Piano Concerto, recorded in London with the English Chamber Orchestra, Paul Goodwin, conductor.  As well, Beach’s renowned Piano Quintet, which pairs Joanne Polk with the Lark Quartet, rounds out the CD.  The Piano Concerto is a large, four-movement work to rival any major romantic concerto.  Beach wrote about the orchestra as a rival to the piano in the genre of concerto composing, and many Beach scholars believe Beach composed this piece with the struggles of an overbearing mother and a domineering husband, as the driving force behind its creation.  The Piano Quintet is also large and romantic in style, and the slow movement enjoys such a breathtaking and poetic theme, it is often excerpted and played on its own in concerts.