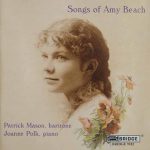 THIS CD WAS NOMINATED FOR A GRAMMY AWARD!!

Amy Beach produced more than 120 songs, only a few of which are known to the general public. One of her songs, The Year’s at the Spring, was so popular in her day that she bought a house in Cape Cod with the residuals from sales of the song.  This CD presents 22 of Beach’s finest songs, a selection which ranges from some of her earliest published efforts through her later brooding masterpieces.  Superb American baritone Patrick Mason is the featured baritone on this CD, which makes an excellent case for these songs as major English language song literature.